Ljubljana is a small city by the standards of capital cities but just as Slovenia itself it offers  many great views at the short distances. Since we are dedicated to show you not only the obvious few spots of Slovenia we decided to divide descriptions of Ljubljana to shorter walks which offer great photo opportunities. 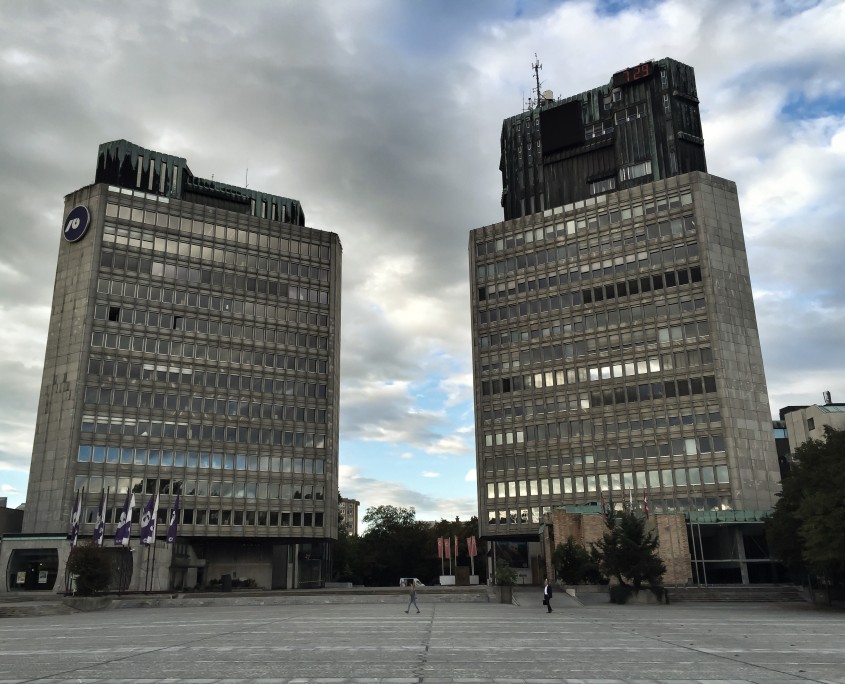 Starting point is Trg Republike (Republic Square). It is the centre of contemporary Ljubljana built in 1960 by famous architect Edvard Ravnikar and  surrounded by the Parliament (just behind my back), Cankarjev dom – cultural and congress centre, Maximarket department store and TR3 and Ljubljanska banka office buildings (on the photo). All building were built between 1954 and 1975  and that’s why I call the square “contemporary”. Until a few years ago it used to be a parking space. Now, when empty, these two buildings stand as a kind of entrance (or exit). Since the square itself is fairly empty it offers fine but tricky photo opportunity.The square and the buildings are huge and the sunlight comes mostly from behind of Maximarket or the towers. See it for yourself. In the late autumn sun sets just between the towers. 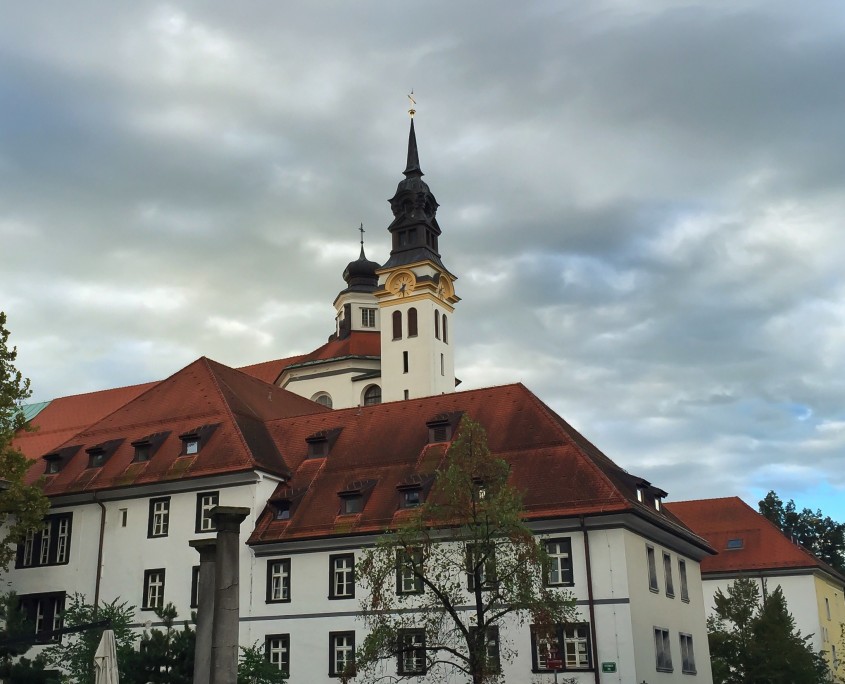 Ursuline church and monastery are just a passage of Maximarket store away – facing the towers just turn left. Too close in fact to find enough space for a proper shot. The church tower is also visible from the Republic square over the roof of the store and from some side views, but always just partially. But if you turn left again and use the underground passage just a few steps away you’ll find yourself in a fine park of Kongresni trg (Congress Square). Now, on your right, is a front side of the same church from 1726. 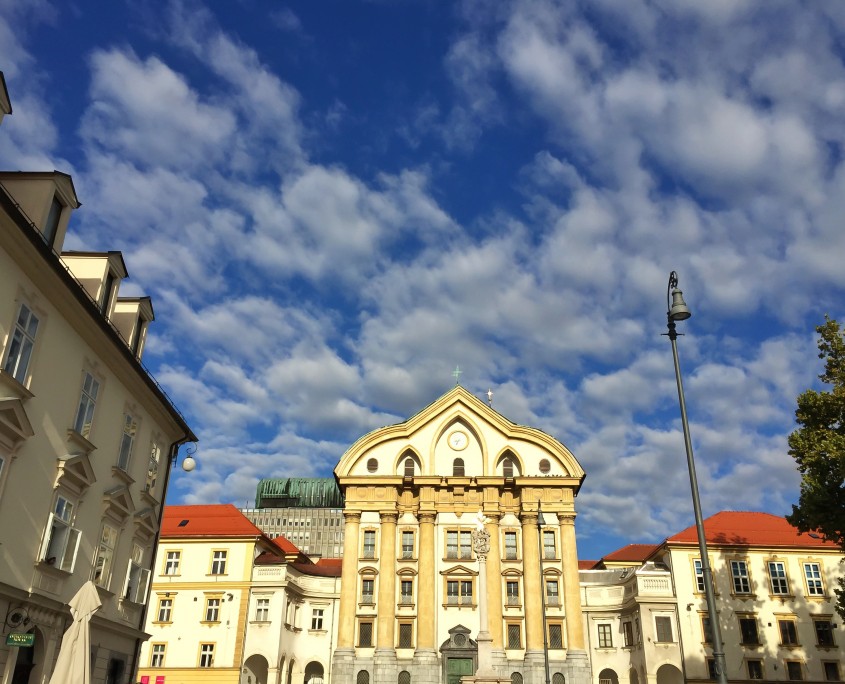 The concrete part of the square where you stand now also used to be a parking lot but now offers a clean view on the magnificent Ljubljana Castle over the building of Slovenian Philharmonic, one of the oldest of the kind, from 1701. Just behind your back, taken from the steps of the church. 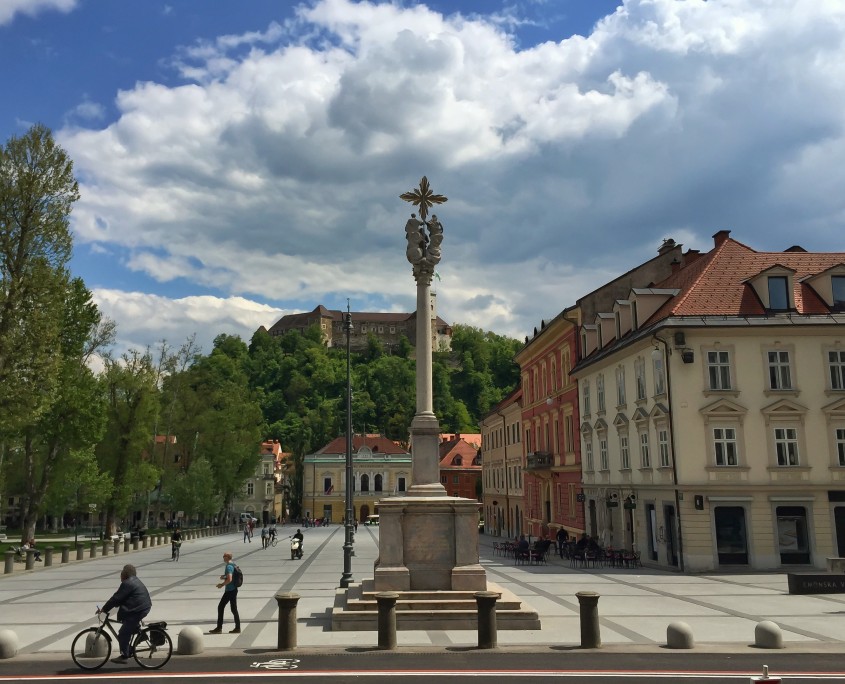 The beautiful park itself is also called Zvezda (Star), in past times also Sidro (Anchor). Just take a stroll and you find the reason for yourself. 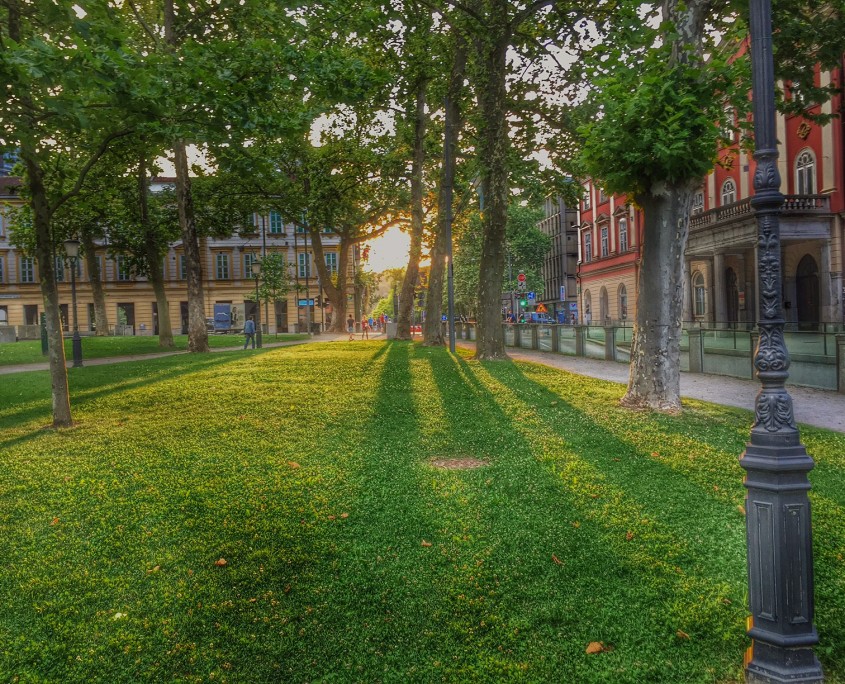 Many different approaches are possible now to the river bank, personally I prefer  the narrow one beside the Philharmonia building. 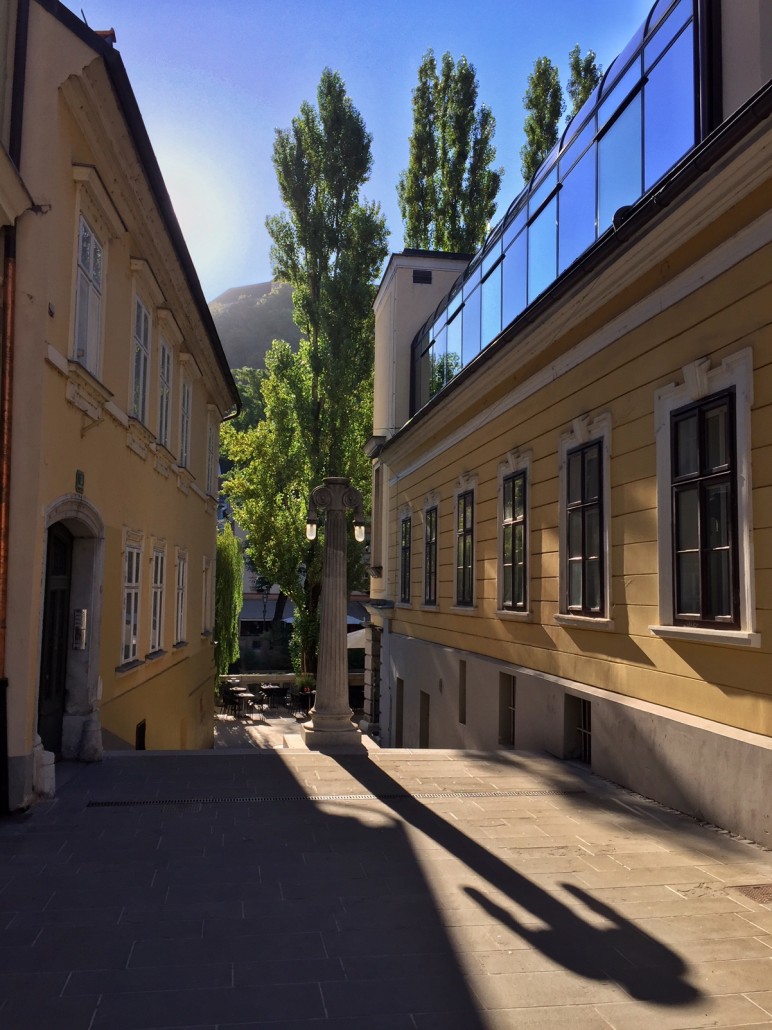 From the From the other side, back to the square, it is possible to catch a sunset a few days around late spring. But in the autumn the view on the river, old city buildings and the castle is enriched with large leaves. 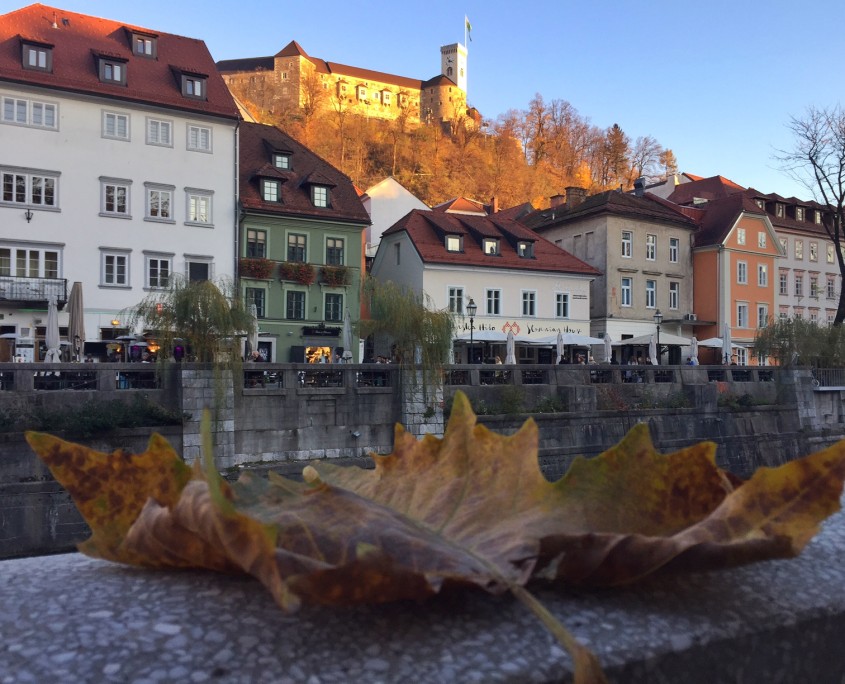 On your left is now the famous Tromostovje (Triple Bridge) with the Franciscan monastery and the Church of the Annunciation in the background. 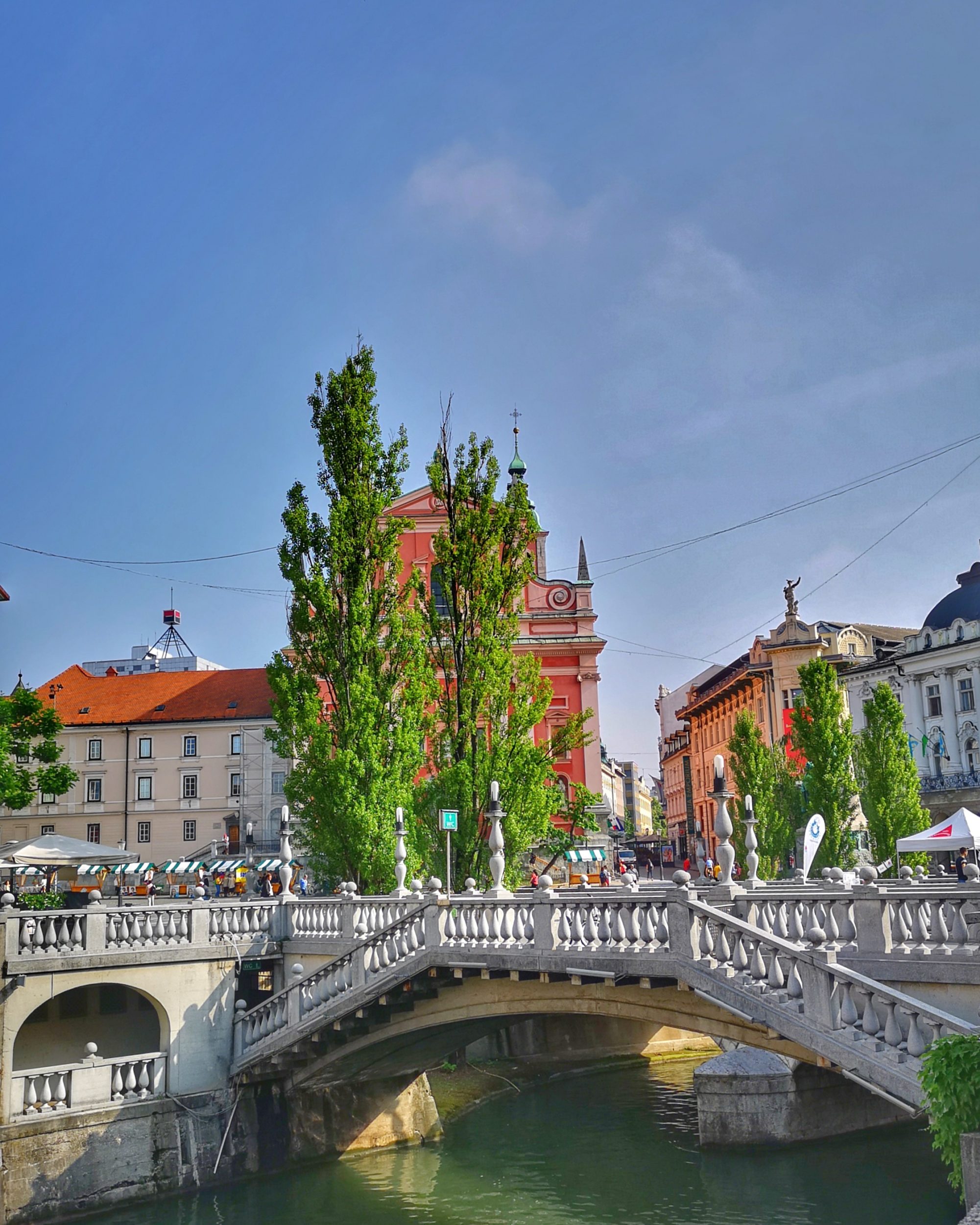 Early morning view in early summer of 2018.Taken with the HuaweiP20Pro.

It is probably one of the most photogenic spots of Ljubljana – it always looks great, different angles and different weather/light conditions just provide for different mood. Almost like Bled Island and Church of St. Primus and Felician at Jamnik. One of the best is from the new small bridge or from Makalonca bar just bellow the bridge. 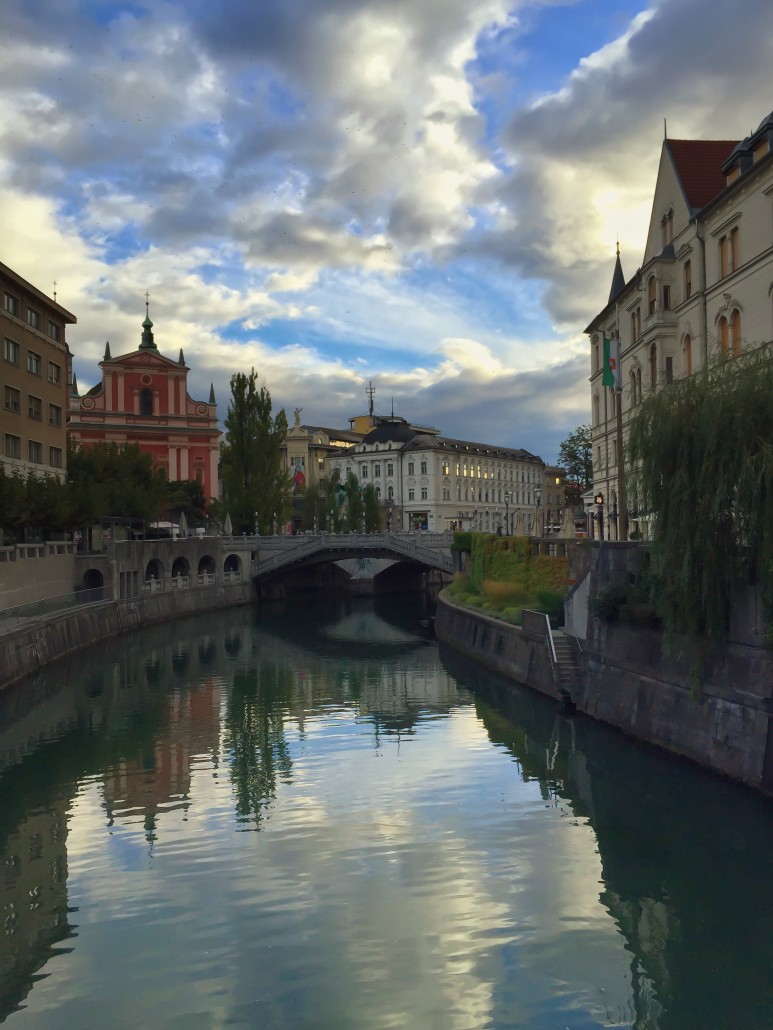 Especially in the season one has to be pretty early to catch the spot without crowds.

Tripple Bridge and the Church of the Annunciation. Taken with the HuaweiP20Pro.

The best view on Prešernov trg (Preseren Square) in the front of Triple Bridge is from the steps of the Franciscan Church of the Annunciation, the red building on the photo above. It is difficult not to catch at least a glimpse of the castle from spots around here. 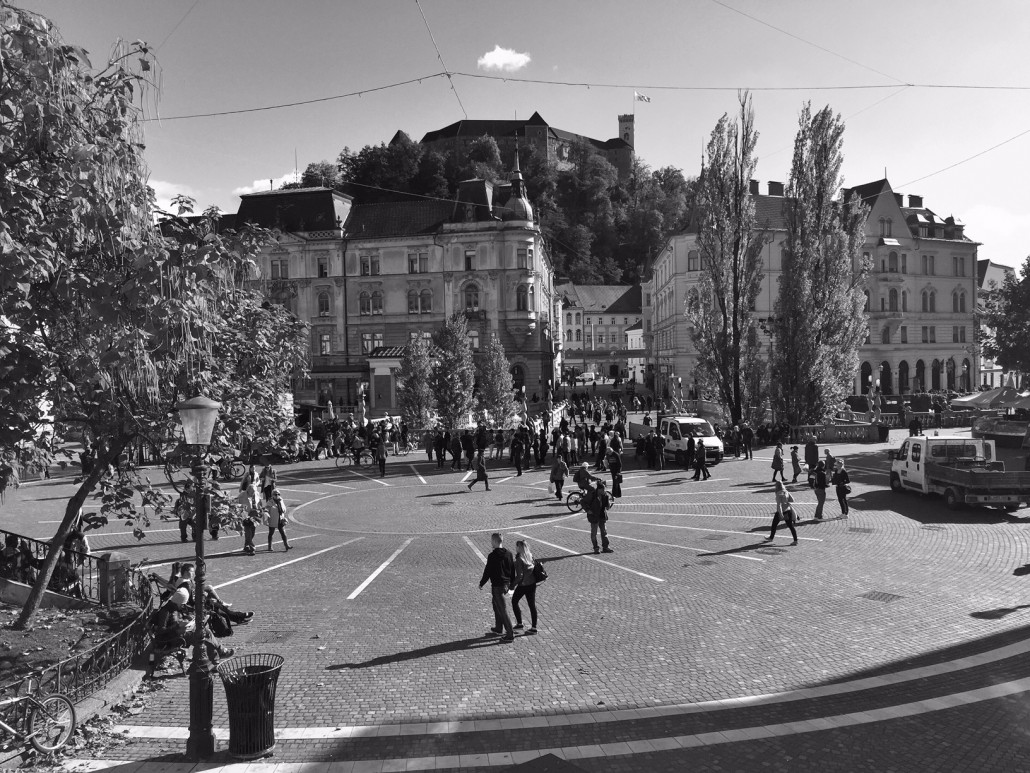 Crossing the Tripple Bridge you’ll find yourself in front of the Town Hall and famous baroque Robba Fountain with a view on the Cathedral. 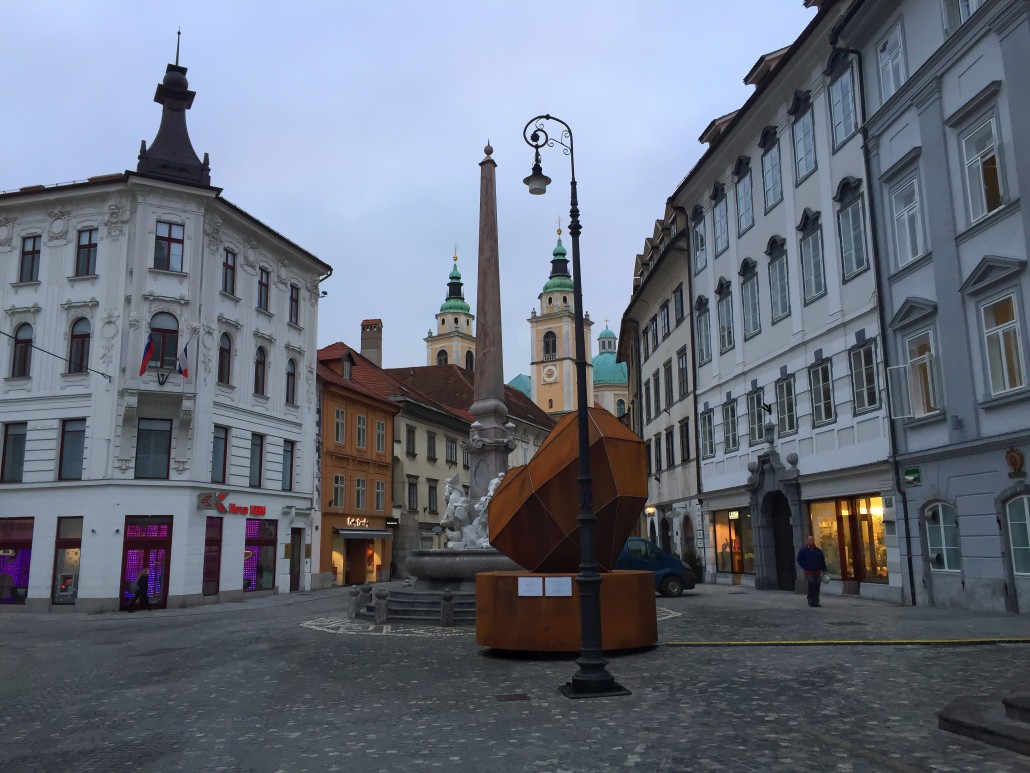 Early morning is always the best time to take photos around here since sun rises somewhere behind the castle, exact point of course depends on the time of the year. Daily sun can be very harsh and  the whole area is already in the shadow afternoons.

For more information about the sights and Ljubljana Visit Ljubljana, one of the best tourist websites and offices in the world. 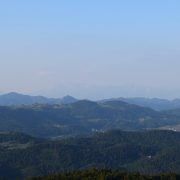 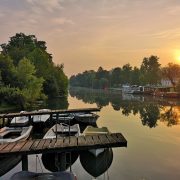 Entering the city with Ljubljanica river 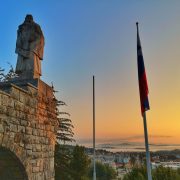 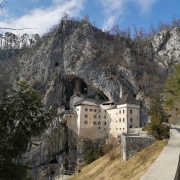 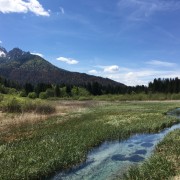 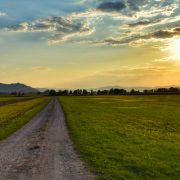 Entering the city with Ljubljanica river
Scroll to top